I had never been to Le Musée de l’Armée at Les Invalides because I’m not particularly interested in military history. However, I’ve now read all of George R. R. Martin’s A Song of Ice and Fire cycle and am half-way through Maurice Druon’s The Accursed Kings series, of which Mr. Martin says “This is the original Game of Thrones.” Rather than dry history-book recitations, these books flesh out the warfare and conflict with true-to-life characters and page-turning drama. I have really tried to like the Game of Thrones HBO series, but after the wildly intricate details and plot lines in the novels, the TV depiction is far too abbreviated for me. The casting is fine, and Michele Clapton’s costumes are gorgeous, but I prefer the world of Winterfell, King’s Landing, and the Wall that Martin’s words conjured in my own imagination.

Steeped as I am in medieval warfare and intrigue, fantasy and historical, I am now primed for a visit to the halls of armor and weaponry. Le Musée de l’Armée is a good archive to enhance the already vivid scenes of my imagining. As with any artifacts, the “realness” gets under my skin. Someone wore this suit of armor. This very one! Fought and killed in it. Felt the weight of helm and cuirass, the viselike pinch of metal joints gouging the skin, and heard the crash of war hammer slammed against metal and the screams of battle. The men themselves were weapons, suited for death.

I would guess that a few fashion designers as well as history buffs were intrigued by the outfit in the final picture below. Coco Chanel, perhaps? 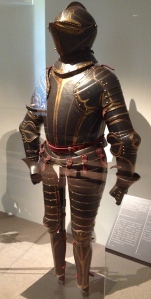 One thought on ““The Game of Thrones” game in Paris”

There was an error retrieving images from Instagram. An attempt will be remade in a few minutes.